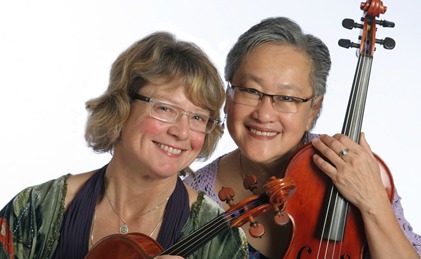 Michelle (Shelley) Mathewson is an active freelance violist in Portland, Oregon. Currently a member of the Portland Opera Orchestra where she served as acting principal viola from 2010-2012, she was also principal violist of the Oregon Ballet Theatre for more than two decades.  She is a member of the Portland Chamber Orchestra, has played in the Oregon Symphony, plays principal violist with the Oregon Coast Music Festival Orchestra in Coos Bay, and is founder of the Delphinum String Quartet, which performs regularly at two McMenamin locations:  John Barleycorn's in Tigard (every 2nd Sunday) and N.E. Broadway (last Wednesday of every month).  Shelley holds bachelor and master degrees in viola performance from the Cincinnati Conservatory of Music, and for many years served as principal violist with the Omaha Symphony.

Sharon Eng is a seasoned violist who has appeared as guest soloist, chamber musician and master class clinician in fifteen countries on six continents.  Her rich musical career has included contracts with the American Ballet Theatre and New York City Opera orchestras, two tours to China as col-principal viola of the Polish Sinfonietta, and chamber trio performances in Kuwait for the Sultan.  She co-founded Classical Nuances, a unique trio comprised of piano, oboe and viola that celebrated its 20th anniversary in 2015.  She is a freelance violist in Portland, Oregon where she maintains four violin/viola teaching studios, performs with the Raphael Spiro String Quartet, is president of the Oregon Viola Society, and faculty of the Intermuse International  Music Institute and Festival at Mount St. Mary's University at Emmitsburg, Maryland since 2003 (www.imif.us).  She currrently holds the distinction of Adjunct Associate Professor at the University of Canberra in Australia.  She completed her Bachelor and Master degrees in viola performance at the Juilliard School.